May 7, 2012 / restaurantdieter / 0 Comments
When a restaurant bills itself as “the next generation diner” and has a public relations agency, you know the folks behind it have ambitions.
But brush past what sounds like hype just long enough to meet Ype (pronounced Ee-pah) von Hengst, co-founder and chef of Silver Diner, a chain of 15 restaurants in the Washington D.C. area.
This is the man who took French fries off the kids menu. You heard that right.
“It’s our moral obligation to give these kids great food so we don’t have problems,” he told me recently at the National Restaurant Association trade show at Chicago’s McCormick Place.
Most of the children’s menu consists of items that meet the NRA’s Kids Live Well program. It requires a meal consisting of entree, side and beverage to have no more than 600 calories with less than 35 percent of the total coming from fat.
So a turkey, beef or bison slider comes with American cheese, but also a side of mixed vegetables.  fresh strawberries or a salad. The sides can be substituted for other healthy fare — edamame, brown rice or organic apple sauce.
Silver Diner will serve French fries if they are requested, but they do not appear on the menu.
Keeping fries on the down low isn’t the end if it. The dessert menu has items such as a shake made of pomegranate juice, banana, yogurt and wheat germ and a low-fat strawberry angel cake.
“This is so, so important,” he said. “Obesity is big in this country, and there’s no good reason for it.”

The National Restaurant Association announced that it now has 96 brands representing 25,000 restaurants participating in its Kids Live Well anti-obesity program. Kraft announced that it has become the first food service manufacturer to join the program. 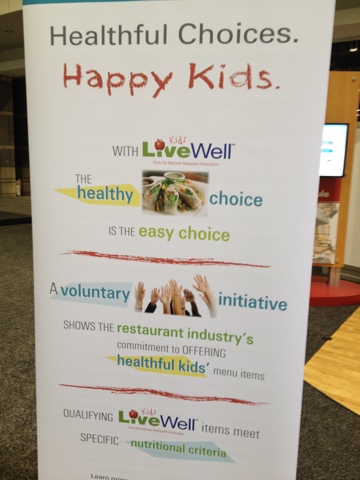 Happier McDonald’s Happy Meal, but Will You Choose It?

By September 2011, McDonald’s is planning to introduce a Happy Meal that is healthier for children.

The meal will come with apple slices — two bags if one wants to skip the fries, which are also scaled down to a smaller portion. The beverage choices will include fat free chocolate milk and 1 percent milk.

We wondered why a prominent chain like Mickey D’s would leave itself out of the National Restaurant Industry’s new program to promote healthier chain meals for children. Apparently, McD’s had its own announcement coming shortly.

Add to that how powerless parents often are when they pull into the Golden Arches. Nation’s Restaurant News says that only 11 percent of those ordering Happy Meals now choose the apple slices option.

Fries and obesity vs. tears: I guess the fries win.

Restaurant Industry Wants to Talk to Our Kids Without Restriction: OK or Not?

Last week Wednesday, in a big ballyhooed news conference, the National Restaurant Association announced a new program called “Kids Live Well,” intended to highlight meals and items that are healthier for kids. A meal (entree, side, beverage) earning the distinction would have less than than 770 mg of sodium and less than 600 calories, no more than 35% from fat.

Then on Thursday — just one day later and certainly more quietly — the association issued public comments calling for the withdrawal of proposed federal guidelines on marketing products to children under 17. The reason: “the principles could eliminate the marketing of healthful options to kids and adolescents.”

Can the timing be any more transparent? Dear regulators: We just introduced this great program;  you no doubt have heard about it from all the media coverage. If you push these guidelines on us, we won’t be able to tell kids all about this healthy food we want to serve them.

Uh right. I can see the companies all calling their ad agencies now and telling them to put a hold on the television commercials touting the grilled chicken entree with apple slices and skim milk.

Come on, get real. Marketing unhealthy items to children was a concern with cigarettes, and given the rise in obese children and Type 2 Diabetes, some restrictions on marketing to children are necessary.

Child Restaurant Initiative: Tell Them What You Think

Some of the folks behind the National Restaurant Association’s new initiative to promote healthier meals for kids at chain restaurants are asking for your feedback.

Called “Kids Live Well,” it’s basically a “Good Housekeeping Seal of Approval.” It requires that all participating restaurants offer at least one meal (consisting of entree, side and beverage) for less than 600 calories, fewer than 35 percent from fat, and less than 770 mg of sodium.

My take: a worthy idea, but maddening that so many notable names in the industry that push unhealthy food (on adults and kids) are missing. Only 19 chains with 15,000 outlets nationwide are taking part. Organizers are hopeful more will.

If you leave your comments here, be sure to name names. Maybe a little public shaming will persuade McDonald’s to jump in.

The National Restaurant Association kicked off a new initiative Wednesday to help parents choose wisely for their kids, but boy does it fall short.

McDonald’s, for one, isn’t participating.
Called “Kids Live Well,” it’s basically a “Good Housekeeping Seal of Approval” for menu items. It requires that all the participating restaurants offer at least one meal (consisting of entree, side and beverage) for less than 600 calories, less than 35% fat and less than 770 mg of sodium.
It’s a worthy effort, but a truly small one: Just 19 chains with a mere 15,000 locations nationwide are participating at this point. Notable by their absence are brands such as McDonald’s, Taco Bell and a ton of others. Just compare it to a list of the chains doing business in the United States. It’s a scandal who’s sitting this one out, considering how much unhealthy food they peddle to both adults and children.
The announcement expressed hope that other chains would join the effort. No kidding. If they don’t, the hundreds of laggards deserve our ire.
Follow me @TheRestoDieter on Twitter and on Yelp!

Will the Restaurant Industry Really Get Serious?

Tomorrow morning, the National Restaurant Association is holding a news conference to announce a new national children’s menu initiative that claims to “provide parents and children with healthful menu options when eating out.”

A public relations release says that the news conference will highlight “how restaurants are helping parents by making the healthful choice the easy choice.”

Note the use of the word “are.” So this is happening already and the news conference is just to draw attention? Is this just a Kumbaya public relations moment for the industry — instead of an announcement of new solutions? Or a labeling effort to make it easier to see what few items on a chain restaurant’s menu are healthy?

Whatever restaurants are doing it is clearly not enough. One look at the statistics tells you that. Something dramatic needs to happen.

The first group is a non-profit with a record of advocacy. Its board of directors is largely composed of health and school officials. One assumes they are unlikely to front for an initiative that didn’t offer something substantive.

I’m less sure about the latter company, but not ready to knock it. Healthy Dining’s goals appear to mirror my own — nudging restaurants to offer healthier fare and celebrating them when they do.

However, it’s worth knowing that while I receive no compensation from the restaurant industry, Healthy Dining does. Its corporate website says it functions as a sort of Good Housekeeping Seal of Approval for menu items. I’m sure Healthy Dining would make the argument that it is working on the same issues — but from the inside, and it would be unfair to fault that. However, the site allows a zip code search for the healthy menu items near you. But a search for my zip code turned up McDonald’s, Captain D’s Seafood, Longhorn Steakhouse and a bunch of other chains that — while they have some healthy menu items — still make the bulk of their money peddling unhealthy food.

And because I raised the topic:

For the record, The Restaurant Dieter is a guy pursuing a passion and receives no compensation. Any ads you see on my site are randomly placed there by Google Ads. Perhaps they’ll generate revenue some day. But if that day comes, please know that I will not be involved in selling or placing any advertising. I’ll also have no contact with any advertisers that could affect my judgment.

Speaking of judging, let’s not. Let’s see what tomorrow holds.