When Bread & Butterfly opened in Atlanta’s Inman Park neighborhood a month or so ago, The Atlanta Journal Constitution said it evoked “cozy Euro-style cafés, whether in Paris or Manhattan, with copper ceiling tiles, patterned floor tiles, marble accents and, of course, café tables.” Perhaps that’s why the portions are so small.

That might seem like a lucky break for someone on Weight Watchers. The portion size at some American restaurants — Cheesecake Factory, for instance  — often is gargantuan.

But the portions here were so tiny that The Restaurant Dieter left hungry and just had an apple with some deli turkey. The only thing that emerged from the kitchen as a standard portion was pancakes that a friend ordered.

The brunch menu has just 17 items. including two high-fat sides (frites and creamed kale) and marinated olives for $5. So it was a pretty limited menu.

I opted for the three salads: marinated beets, celery root auvergne and lentils and mushrooms.

The dish came with three slices of baguette; 1/2 to 3/4 cup of lentils in a vinaigrette; a single beet; and celery root in a thin mayonnaise-based dressing. I figured 3 Weight Watchers Smart Points for the dressings and 4 for the lentils and left the bread.

As a starter, I had the citrus with yogurt and honey. It consisted of a few grapefruit sections, a few clementine sections atop and honey on the side, as requested.

It was a nice menu option, but again tiny. I counted it as the fruit (0 points) and 1/2 cup plain regular-fat yogurt (3 points).

There’s no reason a 10-point meal should leave one hungry. But this one did.

Topping it off, a friend asked for a skim milk latte. Answer: we don’t have it. The requested dinner menu never arrived, so no telling whether it’s any better later in the day.

About the only high point was the iced tea, which came with a nice carafe for multiple refills.

To call Bobby Flay a celebrity chef is an understatement. The guy is everywhere — on Iron Chef and other cooking shows; on game shows like “Jeopardy” and “Celebrity Poker Throwdown”; on TMZ dueling with his ex over her boob job.

Is one of his restaurants really the place to go on New Year’s Day for brunch when you’re dead serious about eating healthy? Um, yes.

The Restaurant Dieter’s pals had reserved Bar Americain, described as an American brasserie. The brunch menu mixes things up with a hint of French, some Southern, some Southwestern.  But there are plenty of choices for a Weight Watchers member hoping to keep the points expenditure to a minimum.

They start with an extensive raw bar and shellfish platters going for $75 and $120. Then there are salads like a southwestern Cobb, mani-mahi tacos and spicy tuna tartare. And should your friends want something richer there are two kinds of eggs Benedict, croissant French toast and a burger.

The staff pushes a side of hot potato chips with a blue cheese sauce for a side, which we, of course, ordered. I had one large chip with the barest taste of the blue cheese sauce. It tasted exactly as you’d expect — very Flay-like and totally unsubtle. One guesses this $9 side does quite well for him, but I wasn’t dying for more.

That same server who pushed the chips, however, was a complete pro when it came to adjusting my choice, the tacos. “I can leave the sauce on the side,” he offered, without my asking.

The entire dish comes pretty well deconstructed anyway — two 3-inch flour tortillas, bib lettuce for wrapping, a pineapple-and-macadamia-nut relish, pickled onions, a hot red pepper sauce and julienned papaya and cabbage slaw. Mine came with a citrus sauce on the side, thanks to the accommodating server’s offer. It wasn’t needed, anyway. There were plenty of interesting flavors among the condiments that were provided.

I tracked the whole of it as 1 flour tortilla (3 points); 4 ounces mahi-mahi (1 point); 1 teaspoon macadamia nuts (1 point); and 3 safety points for fats and other stuff I couldn’t quite figure out.

Call it a good start to a new year.

New York review: At Tenth Avenue Cookshop, the accommodating waitstaff gets a cheer

At Tenth Avenue Cookshop, everything on the brunch menu looks good. The pastry basket looks wonderful. People all over the place are having big hearty cast iron skillets with luscious huevos rancheros, three eggs with black beans, jack cheese and creme fraiche. The fries are heaping mounds of thin fried goodness. It seemed like a poor choice for a dieter.

There were two salads, the most promising of which was a shrimp salad with radish, shaved carrot and fennel. I ordered that.

We’d sat at the bar and watched the bartenders making drinks. For one popular one, they shoved a fat slice of grapefruit into the glass first. It looked inviting.

Although not on the menu, The Restaurant Dieter asked. The server was only too glad to comply, and it didn’t even end up on the bill. The grapefruit was at the peak of season — tart but also sweet. As an unexpected bonus, the salad itself had a few fat slices.

The Weight Watchers point tally was a mere 3 points — 2 for 4 ounces of shrimp and 1 for 1 tablespoon of vinaigrette. It was so low that we ordered the assorted housemade treats — the kind of small sweet things that often turn up at a fine restaurant with the bill. These included a wonderful cherry pistachio nougat and tiny disc of intense orange olive oil cake. I tried them all, assessing myself another 5 points.

If you go, sit and the bar. The folks there will treat you well.

Brunch at M. Henry was a real treat. We were looking for a place that would accommodate my nephew, who is vegan. My other nephew recommended this place. It was a great choice.

On the decadent end, one nephew had “bliss cakes” (pancakes) with marscapone, peaches and cherries. One had scrambled tofu.

I had a cup of black bean chili and streamed vegetables with chicken over brown rice. It was just what I needed after last night, when things went awry. On the flight to Chicago, the snack basket in first class had candy and fattening, salty chips, pretzels and peanuts. Then at my sister-in-law’s later that evening, pizza and a nearby bowl of pistachios wrecked the rest of the day.

We’re going to my nephew’s graduation party tonight, but I feel like I’m going in satisfied and well prepared. 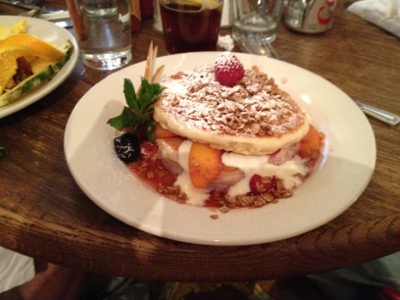 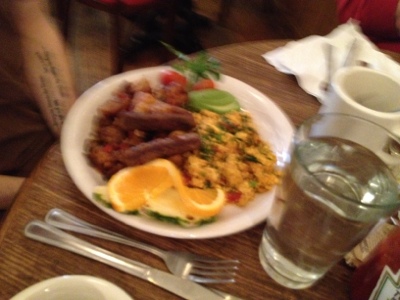 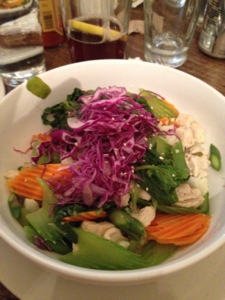