The Restaurant Dieter typically does not really rely on Yelp for recommendations. One reason is the ying-yang nature of the crowd: “it’s the best place ever” co-exists with “They served me fried rat and the host was so rude to me!” Another is the potential for a business to work the system with fake reviews.

But in an unfamiliar area, I do open the app up from time to time just to see what is close by. And I do glance at the reviews. It’s hard not to. I just temper my expectations.

When the claim is “the best turkey sandwich ever,” one has to wonder. I don’t know if I can support that claim, but it was good.

The turkey is not Dietz and Watson or Boarshead or anything else from the deli case. It’s fresh and apparently roasted in the kitchen and sliced to order.

Imagine the surprise of being asked this follow-up question after ordering the dieter staple: “White, dark or both?”

What arrived on the cheapest paper plate was slices of seasoned, but not salty, meat, so juicy it threatened to soak the bread. This kitchen spends the money on what counts.

With a banana, it brought lunch to 6 Weight Watcher points.

If you’re in the village, stop by for a higher quality turkey sandwich than you’re most likely to find anywhere — except your own home perhaps. 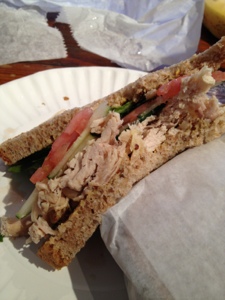