This man will be 54 in 4 months. He did weight training today. 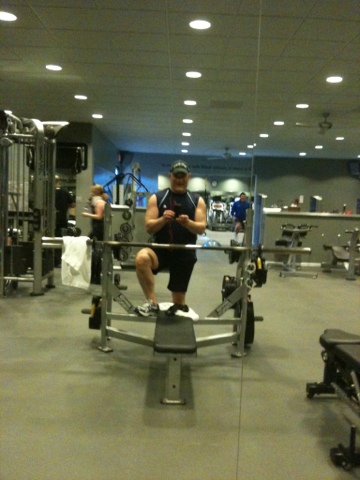 On nearly every trip to Canyon Ranch, the fitness resort, we’ve encountered a celebrity. I’ve taken an aerobics class with Sweet Baby James Taylor and gossiped with actor-playwright Harvey Fierstein. The Restaurant Dieter’s spouse took a boot camp class with the pop star Pink. She kicked his ass.

After the first day, we thought this might be a celebrity-free visit when my spouse noticed a tall black woman, big eyeglasses, reading quietly at dinner. It looked to be the supermodel Iman, wife of rock star David Bowie. As frequent visitors to New York, we know the rules on celebrities: No pictures and for heavens sake, pretend you don’t recognize them.

Today, however, the supposed Iman was on our hike in the Catalina Mountains. The woman pretty much kept to herself and was silent on the bus ride to the trail head

So halfway through, when the group stopped to snack, she sat alone a couple of yards away. I kept a respectful distance.

The conversation at Canyon Ranch often turns to healthy living and eating. So while we consumed our fruit crisp (no sugar), hard-cooked egg, cheese and trail mix (unsalted), we gabbed about eating.

At one point, the group was talking about the obscene sodium levels in restaurant food.

Suddenly, a deep and accented voice boomed into the conversation from over my shoulder. It was the same distinctive voice I’d heard on TV from the Somali-born model. This was Inman.

She said never found it necessary to read food labels until she came to the United States, where so much of the available food is processed. She agreed it was awful how much fat and sodium are in restaurant food. She was incredulous that people have criticized Michelle Obama for advocating on behalf of efforts to combat childhood obesity.

And why not? She and Bowie have an 12-year-old daughter.

Here’s The Restaurant Dieter and his husband on the hike. Iman asked me to take her picture with her cellphone, but I respected her privacy and did not take one with mine.It’s followed by a couple of pictures from what I ordered at lunch in the dining room: BBQ chicken sandwich with jicama salad and macaroon and chocolate chip cookie for dessert. 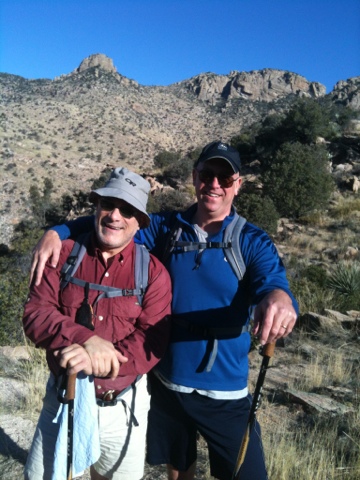 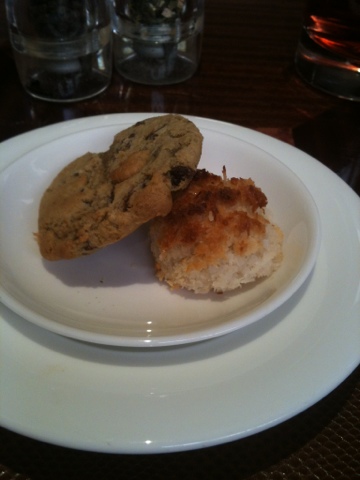 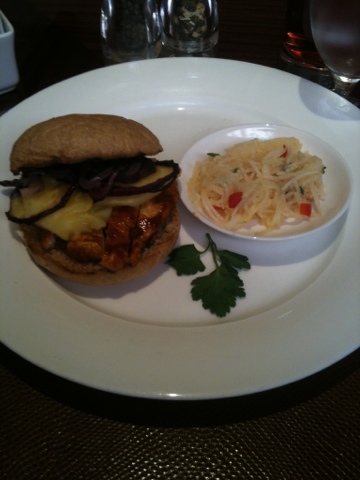 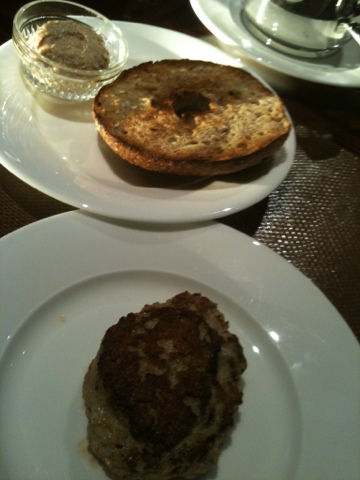 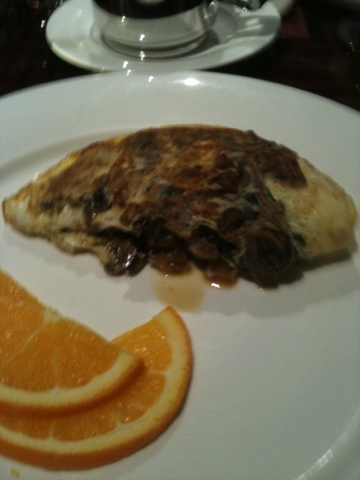 Places like Canyon Ranch used to be called fat farms. But they really do not starve you or serve you tofu everything.

Some visual proof. I had the pot roast. 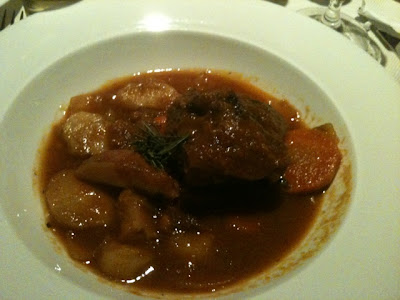 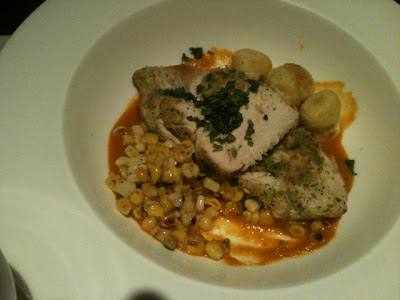 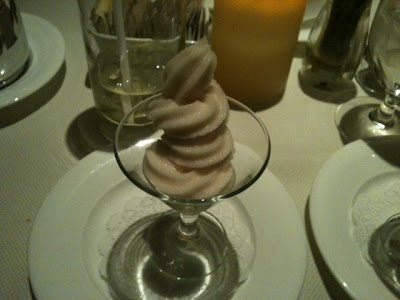 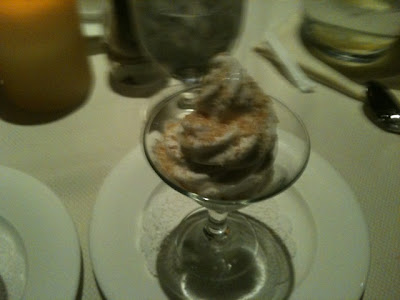 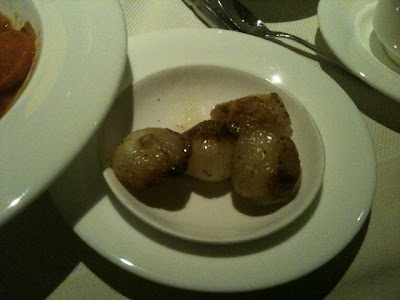 Today is my first day at Canyon Ranch, the fitness resort in Tucson, Arizona. It went OK. It was a little less action packed than normal for a visit here. I was so worn out from a couple days of work travel, eating poorly, lack of exercise and a minor car accident. My normal get-up-and-go CR experience turned into lunch, a loooong nap and then a massage I hadn’t earned.

So I just did an hour of weights, which felt good. I also did the body fat test today and came in at 19% fat, still in the acceptable range for men, on 206 pounds. Here’s a pic from Day One. Tomorrow I start with a 5 mile hike 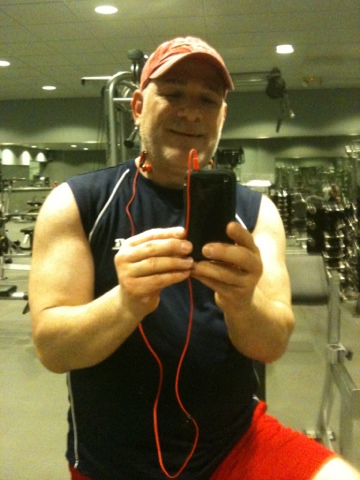 After a day of eating too many biscotti on a visit to my family in suburban Detroit, it was time to buckle down to lean protein and vegetables. So when we got to Wild Coney, I went for the large Greek salad, dressing and feta on the side, of course. The menu wasn’t kidding when it said large.

Yet another chain restaurant wants to cash in on our health concerns without really backing it up.

This time it’s the cafeteria chain, Luby’s, with something they’re calling the Livin’ Smart menu. I’m always hopeful when I read something like this, and then I dig in deeper.

More accurate would be Livin’ Ignorant, as Luby’s seems to think none of us cares about the level of sodium in our food and has helpfully left that metric off. So we can’t tell if, like much restaurant food, it is salty and addictive. They must have missed the recent New York Times story on sodium.

I wonder why they left that column out?

Applebee’s and healthy choices? What a crock

Restaurant.com reports the results of a survey by Applebee’s about food related New Year’s resolutions. Undertaken on behalf of the chain, it says 9 of 10 people break resolutions to eat healthier, with the most popular reason being “I like to eat what I want, when I want.”
The item goes on to tout how this is possible with Applebee’s Under 550 menu. However, back at corporate HQ, the survey likely confirmed that this casual theme dinner house is on the right track from a business perspective: largely ignore the obesity crisis because you can make a lot more money selling mostly high fat-salt-sugar combinations masquerading as meals.
There are exactly six entrees on the Under 550 menu, and they even carry Weight Watchers Points Plus tracking values. But they are salty and incredibly unhealthy for that reason alone. They range in sodium content from 1,520 mg to 3,180 mg — despite the fact that 1,500 mg a day is considered the maximum any adult over 50 should eat.
And then there is that asterisk about how variations in preparation can increase or decrease the nutritional values. Having eaten their Weight Watchers entrees before, I’m pretty sure it’s the former rather than the latter. The food was overly shiny, and the portions easily compared with a typical Applebee’s meal. Indeed, a study published in the Journal of the American Medical Association in 2011 found errors of 100 calories or more about 19 percent of the time.
Nice try Applebee’s. How about a real New Year’s resolution from you?
Follow me @TheRestoDieter on Twitter and on Yelp!

Not every meal can be planned or a dining experience. I’ve been waiting at the vet for the doc to finish the blood work on our Labrador, Nan. It’s lunchtime, I’m hungry and I have to stick around this area to pick her up.

Joe’s menu is a weird combination of Japanese teriyaki bowls and falafel. The new owner told me he’s in the process of bringing clarity to the place. It will soon be “an international pita cafe,” he said with a distinctly Middleastern accent. Maybe he’ll rename it. Tarek’s Pita Cafe?

Anyway, I opted for a teriyaki bowl with just chicken, vegetables and the sauce, which he told me is getting booted off the menu. I suppose there’s always Greek Salad and chicken kebab in the future.

Time to stop writing and eat. 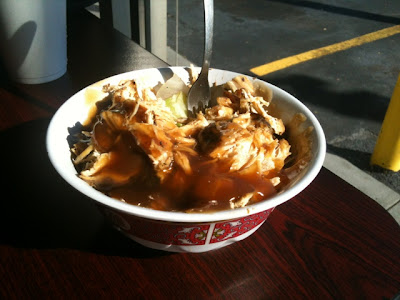 But it was a gift…

Zingerman’s deli in Ann Arbor, MI, is always crowded. Good sandwiches, salads, breads and baked goods bring in locals, tourists and University of Michigan Students alike. It is possible to behave on your diet there, even with so many great choices.

In recent years, however, it’s evolved from a purely local institution to a growing mail order provider of food, including high end condiments like olive oils and cheeses, and gift items.

So when a wonderful maple walnut pound cake arrives as a gift from a friend yesterday…a week of good behavior went out the window.

Half gone already? Yikes. And just when I thought the holidays were over. 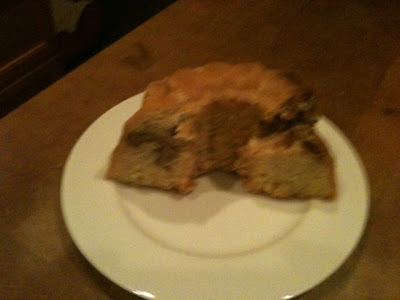